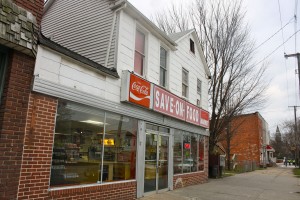 Willam L. Hawkins owned a grocery store on the 400 block of Patapsco Avenue from the 1920s until the late-1980s. He was from an old German family that immigrated to Baltimore in the nineteenth century. The original Hawkins family store was located near the Cross Street Market at Light and West Streets in South Baltimore. The Hawkins family later moved further south to the emerging community of Brooklyn located across the Patapsco River before it was annexed into Baltimore City in 1919. Hawkins’ history on the block began in the 1920s at 413 Patapsco and expanded in the 1930s to include neighboring 415 Patapsco Avenue as well. Hawkin’s Super Market had its peak in the 1950s and endured into the late-1980s.

William L. Hawkins was born in 1899 and was ten years old when he witnessed Haley’s Comet in 1910 in the Brooklyn neighborhood. “I remember setting my alarm clock at 4 a.m. and walking to the end of Fourth Street in Brooklyn. I looked across the Patapsco River and it was over Fort McHenry. In my childish mind, it appeared to be a wide long tail and, came down to the star part which was leading the way. I was not frightened, but it sure did make an impression on me. It was a red or yellow flame.”

In 1915, a family member (presumably an uncle) also named William L. Hawkins, who was a longtime and respected police magistrate (1900-1905) and police officer in Brooklyn, made the news because of a tragic murder suicide. Officer Hawkins, 63 had met and quickly married the much younger Madia [May] E. Robertson, 34 previously of Highlandtown early in 1915 just months after her first husband died. However, the marriage had troubles early on because the new Mrs. Hawkins liked her freedom and Hawkins felt neglected. Following a prolonged domestic argument on October 4, 1915, the marital issues came to a head when officer Hawkins shot his wife. She was dressed—wearing her gloves, hat, and coat—with her hand was on the doorknob preparing to leave the house. Hawkins shot his young wife in the hip and head. Officer Hawkins wrote a brief note directing the coroner to consult with his lawyer and then took his own life with one bullet to the temple. Officer Hawkins died instantly and his body was found at the feet of his wife.

While this scandalous and tragic family incident certainly was news, the younger William L. Hawkins made a name in the respectable grocery business. Hawkins was on the board of the Brooklyn Trade Group, attended meetings at the Odd Fellows Hall, a local booster club for prominent men, and was a member of the local Lion’s Club. He chaired a committee to develop playgrounds for local children and rose to be the president of the Grocers and Meat Dealer Association in the 1950s. His family has a long list of respectable community associations.

William L. Hawkins died in 1993 and later that same year the William L. Hawkins Sr. Memorial Library at Maree Farring Elementary (No. 203) was dedicated in his honor. Hawkins was a beloved figure in the community for his personal touch as a longtime grocer and someone who lobbied for his beloved Brooklyn community throughout his life. Four generations of the Hawkins family attended the school at Fourth Street and Pontiac Avenue. At the dedication, the grocer’s son William L. Hawkins, Jr. said, “My father could always make four quarts of strawberries out of three and there wouldn’t be a bad berry in them. My father was very progressive. He urged his fellow grocers to modernize and compete with the chains.” In a Baltimore Sun article on the library dedication, journalist Jacques Kelly wrote, “the naming of the library was also a testament to the permanency of Baltimore neighborhoods.” And that Grocer Hawkins, “the youngest of seven children, was a born Main Street businessman. He preached hard work and salesmanship.”

In 1990 the space at 413 Patapsco Avenue became the Sav-On Food Market. It still has the historic tin ceiling of grocery stores of earlier eras and functions as a market serving the Brooklyn residents of today.