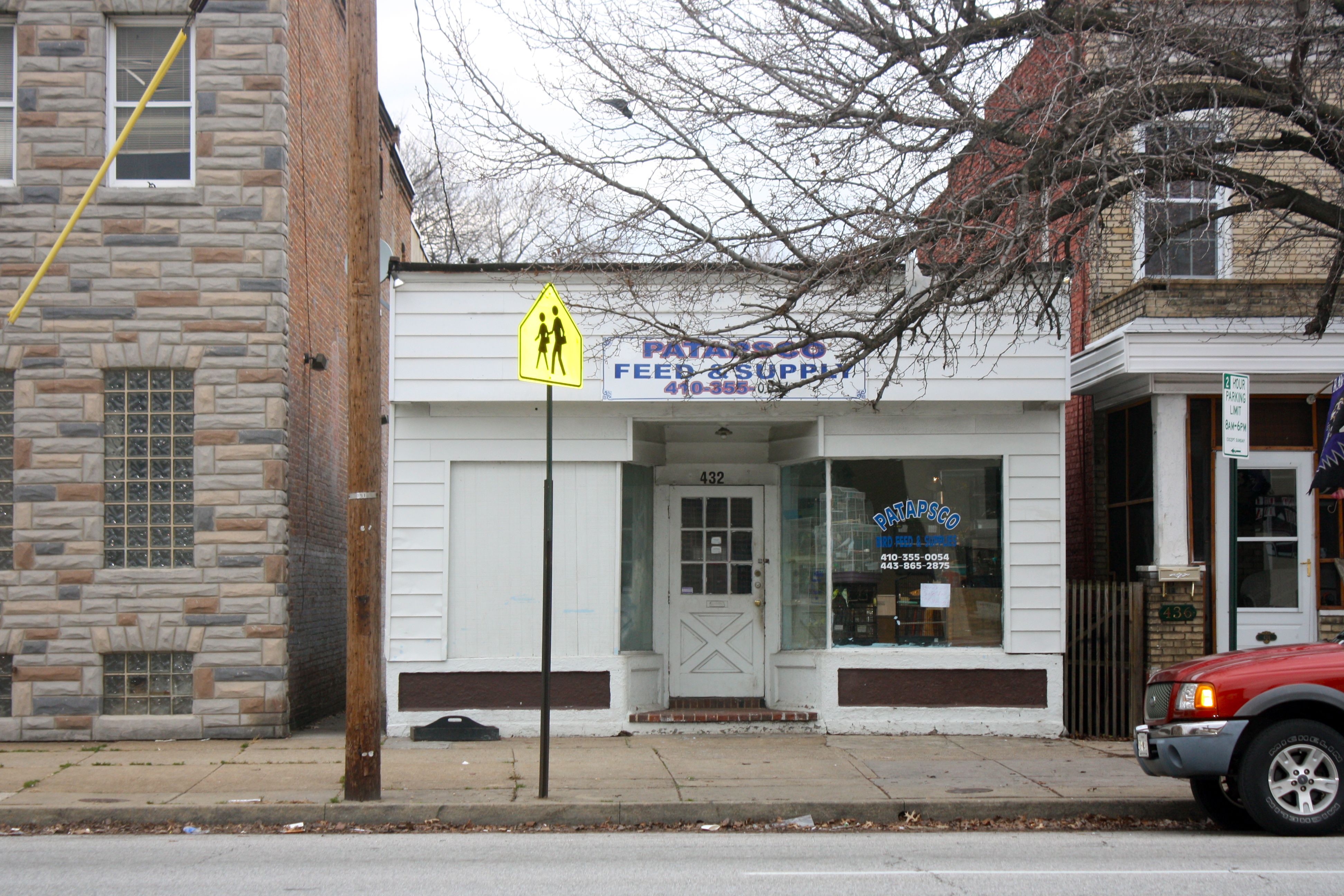 Pigeon fanciers, people who raise and race homing pigeons, once represented a strong and popular cultural tradition in many Baltimore neighborhoods. In his 1995 book Maryland’s Vanishing Lives (Baltimore, MD: Johns Hopkins University Press, 1995) John Sherwood explains the heyday of the sport in Baltimore: “Decades ago, ‘pigeon men’ pursued their obsessive hobby in many neighborhoods. Visiting a backyard or a rooftop loft was as easy as going across the street or around the corner. Hundreds of lofts and many pigeon racing groups and social clubs were around, along with neighborhood feed stores where the birds were bought, sold, and exchanged” (Sherwood 67). Today there are only a couple of pigeon feed stores remaining for pigeon fanciers to get supplies and, more importantly, socialize and talk about their sport. Patapsco Feed & Supply, located at 432 Patapsco Avenue on the main street of the Brooklyn neighborhood of Baltimore, provides such a social space for the preservation of this Baltimore cultural tradition. Neighboring Curtis Bay is also home to the South Baltimore Social Pigeon Club, located at 4514 Curtis Avenue.

Patapsco Feed and Supply is an important place for sustaining this local hobby that is vanishing from our state due to regulation and lack of interest from younger generations. The sport of raising and racing homing pigeons is dying out because cultural traditions need to be passed down to the next generation and because the changing nature of urban culture of Baltimore. In 1995, 75-year-old Brooklyn resident and “dean of pigeon racers” Ray Spoone discussed the history and decline of the sport: “I can’t remember when I didn’t have pigeons, but youngsters aren’t getting involved in the sport anymore. You know what’s killing it? Prosperity! During the Depression of the 1930s,” he continues, “we had no jobs, no money, no cars, and nowhere’s to go, so we stayed in the neighborhood. We had time on our hands and empty space in our backyards and on our rooftops. So we put that empty space to use. We got involved in the hobby of breeding, raising, and training racing pigeons” (Sherwood 67). Today, the Brooklyn and Curtis Bay neighborhoods of Baltimore still struggle with economic issues. Because of this lack of economic development, the community still has the space to keep up the sport. The Baybrook community is one of the last places in the city where the cultural tradition of the pigeon fanciers lives on.

Through the connections made in social pigeon clubs, hobbyists are becoming activists in their communities. This sport is important because it addresses issues that these hobbyists face related to a loss of culture and a loss of place. The loss of culture is linked to governmental regulation from the health department. These hobbyists are independent in nature and will fight regulations against their birds. One regulation declared no more than 50 birds could be keep at a residence, which is something that the pigeon flyers are strongly against seeing as their flocks are can be between 60 to 250. Gentrification has also led to pigeon raising and racing becoming an undesirable hobby.

The pigeon fanciers are dedicated to their craft and say that they are preserving a traditional local hobby passed down from previous generations. These men have a strong history with their birds and many of the vocal opponents to the regulation say that they pigeons saved their lives from dark paths. Kevin Brown who spent 13 years in prison for drug dealing and attempted murder and owned New Breed Pigeon Supply store on North Paca Street, told a reporter. ‘If I didn’t have my birds, I’d be locked up or dead. It’s that important to me. It occupies the mind in a positive way.’” The pigeons helped Brown turn his live around.

The loss of culture resulting from a vanishing community of pigeon racers and breeders is also reflected in the decline of the social pigeon club. South Baltimore Social Pigeon Club was formed in the late 1970s and had many members. In the mid-1990s the handful of shrinking clubs started meeting together in the Curtis Bay spot, located on an industrial street. Part of the South Baltimore Social Pigeon Club mission statement is “to enhance pigeon racing as a sport,” which they work towards as an organization.

Another obstacle with this sport is the decline of urban social clubs. Many of the older members seem to think that the younger generations prefer instant gratification from other forms of recreation—such as watching football or playing video games. The older members of the clubs find an important sense of community in the clubs. Neighborhoods in Baybrook have experienced a decline in population and economic stability as deindustrialization has taken many of the local jobs. The neighborhoods struggle with crime, health issues, and poverty. The loss of place is tied to the loss of culture. However, many elderly residents who have moved out to the county still return to visit and share the culture of pigeon racing.

Brothers Havey, Thomas, and Jimbo Smith all lived on Leo Street in Wagner’s Point with their prize racing pigeons called the WP Fliers in coops on their property. As the relocation effort moved forward in Wagner’s Point, the Smith brothers became the “stubborn bird’s” who fought against relocation. The brothers joked about the sport as “horse racing for hillbillies” but are dead serious when they point out that their lives would not be worth living without their pigeons, who cannot be training to return to a new home. Thomas Smith told Matthews, “Wagner’s Point is the only home the pigeons will ever know. You could burn down that coop and bulldoze Wagner’s Point, and the pigeons would still come back here. And I guess we pretty much feel the same way the birds do.” Homing pigeons are trained to come back to a particular place and if the owner has moved then that creates a problem. “The pigeons, which the Smith brothers says are worth $500 each, are trained to return to their cage in Wagner’s Point, and retraining them all would be nearly impossible. However, the brother’s could not fight the forces of relocation and Wagner’s Point is now gone and it is unknown what exactly happened to the Smith brothers and their prize winning birds.

The remaining pigeon places in Brooklyn and Curtis Bay—Patapsco Feed & Supply and the South Baltimore Social Pigeon Club—are places where the pigeon fanciers can meet and tell stories that  show the importance of preserving this vanishing Baltimore cultural tradition. The pigeon fancier culture is so important to Baltimore because it brings people together and pushes them to advocate for the sport and for their communities. The tradition also speaks to the history of urban culture. The pigeon’s need to return home highlights the importance of place, which resonates when your neighborhood changes or, as in the case of Wagner’s Point, vanishes. Dave Glorioso point out. “I travel as far away as Atlanta to release my prize flyers in competitive event, and if they don’t get shot out of the sky or killed by hawks they get home before I do. Funny thing about pigeons, but even if mortally wounded they fly home to die. You got to admire those birds. I know I sure do” (Sherwood 68). The pigeons and those who raise them have a heightened appreciation of place, of home. These birds can a profound effect on the people of Baltimore, which if the people, places, and stories of pigeon fanciers are preserved, the birds may fly with Baltimore into a brighter future.