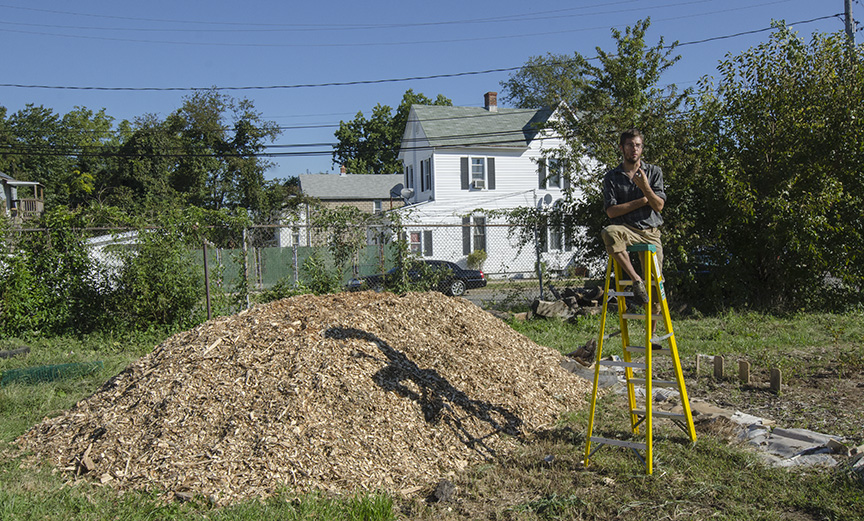 “I had gone from being an amateur gardner in a backyard to having control over a one-acre space and felt completely overwhelmed. I didn’t have any tools or any money, and I just saw this expanse of grass that I knew people wanted to have be a garden. I also had very big ambitions, you know, it’s a big space, it can hold a lot of dreams.” 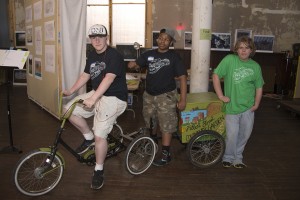 BFHS students showing off their newly designed & decorated Tri-Veggie Cycle at the Filbert St. Community Garden fund raiser last May, 2014. They sell garden items to the neighborhood surrounding the garden, like the infamous Baltimore Arabbers.

The Filbert Street Community Garden is a one-acre community garden, native plant conservation project, education space, and working farm. The space is part of the Curtis Bay-Brooklyn Urban Agriculture and Stewardship Program (CUSP)–a project that uses urban agriculture to improve the health of local residents. The garden strives to increase awareness of the need for land stewardship and good nutrition. The Community of Curtis Bay Association (CCBA) is the fiscal sponsor of the garden. In 2009, CCBA officer Linda Bardo reached out to Jason Reed to revive the community garden as a green space for the community and a place for environmental education for local school children.

The land at 1317 Filbert Street had been a garden twice before. In the 1980s Millennium Chemicals donated the land to the community for a garden to gain good will with residents, but the garden was not maintained. A community garden was revived at the same space in 2004 and, again, did not last long. At request of the CCBA in 2009, Jason Reed began working with the community, local schools, Park & People Foundation (a city non-profit focused on greening efforts), and Child First (an after school program for kids in Baltimore) on building a sustainable garden and education space for residents. 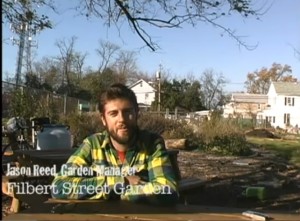 Image from video by Dustin Roddy.

Reed had worked on a community garden in neighboring Westport. He graduated from the Peabody Conservatory of Johns Hopkins University and often plays his banjo or brings local musicians to perform at garden events. In 2011, Reed received an Open Society Institute (a philanthropic organization focused on improving urban area with innovative ideas) Fellowship to expand his work in the garden.

Local residents need a garden because the area is a food desert, which means there is limited access to fresh produce locally. Students at neighborhood schools are engaging in project-based learning to plan, grow, and market their produce to the community. The current iteration of the Filbert Street Garden has a successful record of making resources more available to the community, providing educational programming local school children, and growing food with students and neighbors every year. 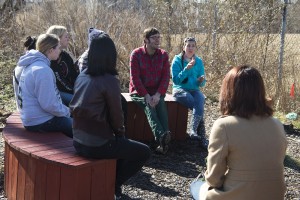 Jason Reed centered in red is teaching in the outdoor garden classroom with American Studies and visual arts students.

During the first five years since the community garden was revived at Filbert Street under the leadership of Reed, a clear and sustainable plan to develop educational programming and a sense of ownership by residents has developed.

The garden has an outdoor classroom, school and community garden plots. orchards, native habitats, a guided nature trail and meditation area, a memorial garden, and educational signage designed and created by students and neighbors. The garden’s relationship with stakeholders is becoming stronger, and the internal organization of the garden is growing into a committed and self-sustaining group with specific goals and realistic plans for accomplishing them. The program was started by the community in response for a need for better food access and stewardship education. Its success serves as a model for other communities in Baltimore.

By Prof. King, 2014
Photographs by Stephen Bradley unless otherwise noted. 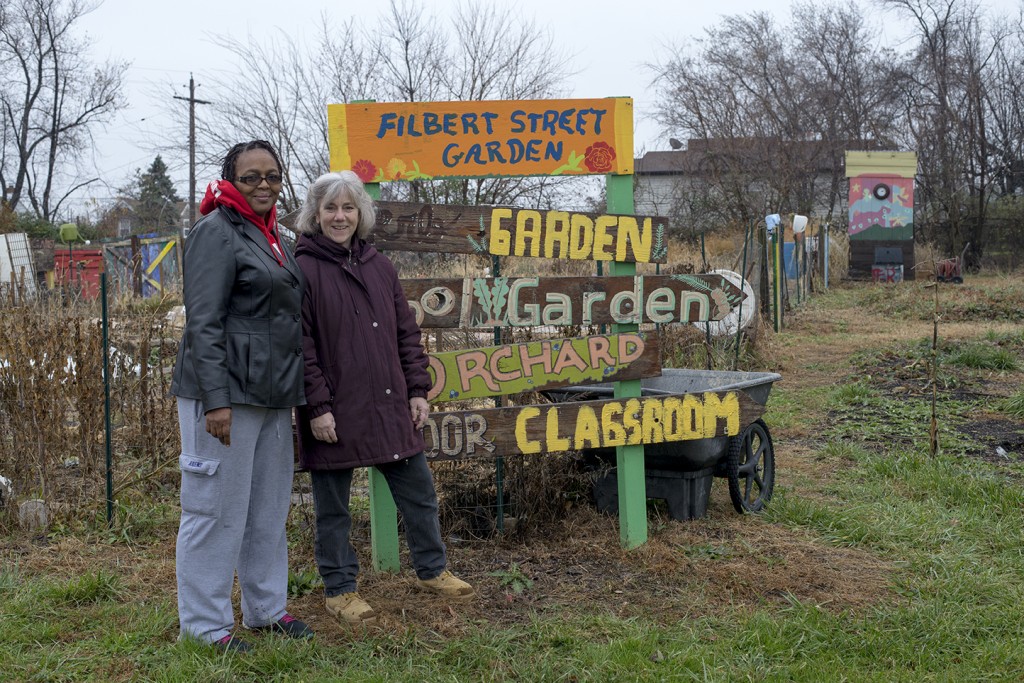 Rodette on the right hand side is the new garden manager, who was hired by the funds raised last May. Kathie, next to Roddet is from Rotterdam, who collaborated with Jason last year as part of a cultural exchange through the Baltimore Rotterdam Sister City initiative out of the Mayor’s Office.