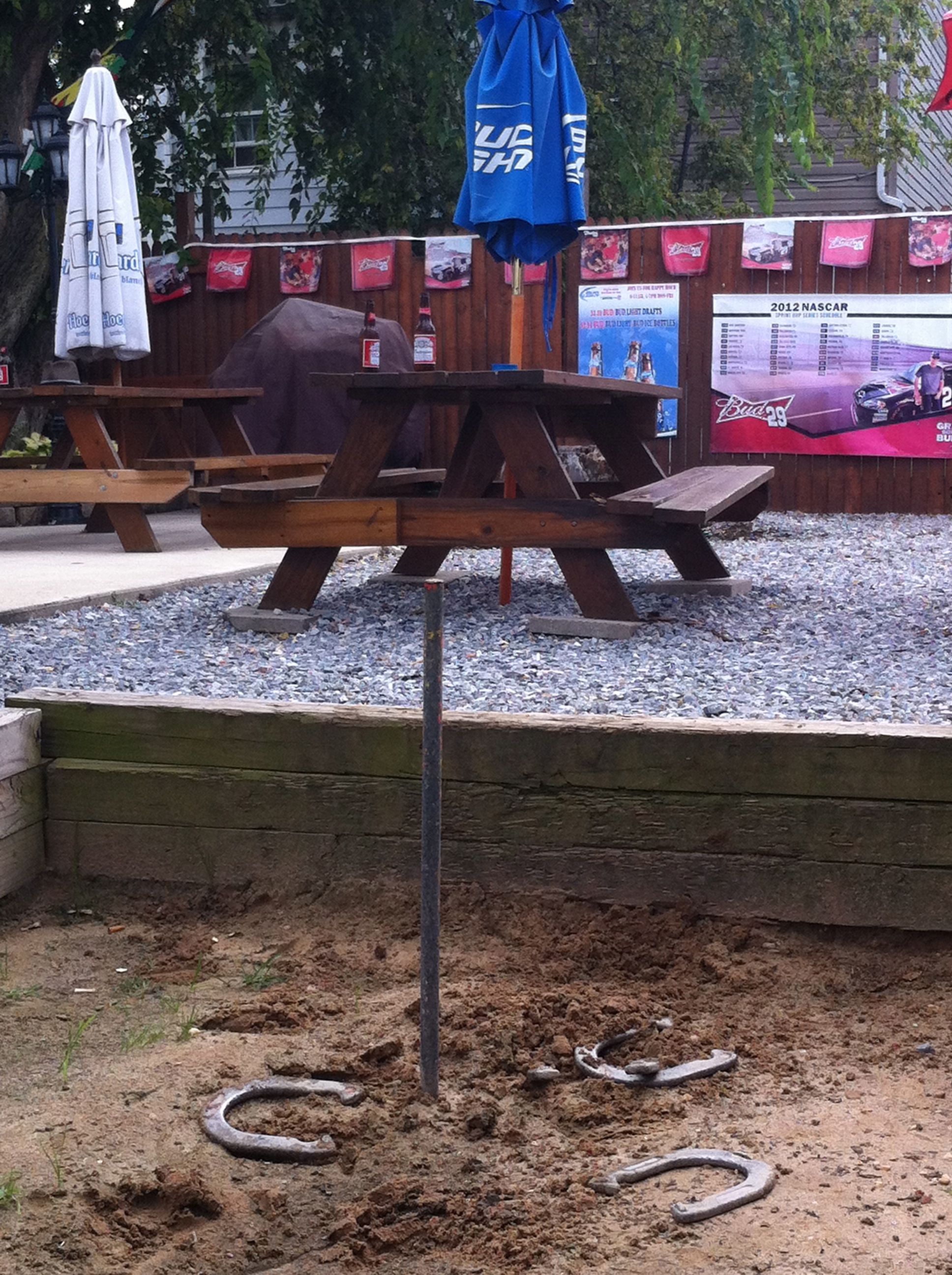 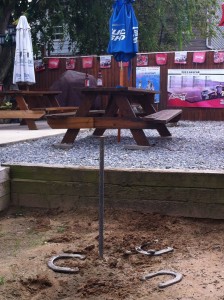 Horse shoe pit out back at Dream’s Inn.

Dream’s Inn, located at 527 East Patapsco Avenue, offers something that is becoming more and more difficult to find in the Baltimore area – a regulation-size horseshoe pit. The large tavern sits on the main thoroughfare in Brooklyn, situated between 5th and 6th Streets. The establishment fits right into the working class neighborhood – cheap beer (Bud bottle, $2.50), several pool tables, and plenty of televisions to watch sporting events. The place is best described as a sports bar – a “ravens bar” according to the bartender. Umbrellas donning the logos of domestic beer companies dot the large outdoor German-style beer garden. The Baltimore City Paper “City that Drinks” guide heralds Dream’s Inn as the “perfect place to get your pitch on.”

A search of the liquor board records shows that the Dream’s Inn liquor license is held by Patricia Reinsfelder, as an agent for Scur-Rein, Inc. There are not any other liquor-serving establishments associated with either name within the Baltimore City limits. Although Dream’s Inn has enjoyed a relatively short tenure (it first appears in City records in 1995), the trajectory of 527 East Patapsco Avenue is very interesting.

From 1928 to 1937, the space was operated by John H. Hohman, first as a confectionary and then as a restaurant. In 1940, less than a decade after the end of prohibition, Howard E. Schline took over ownership. Schline maintained ownership until at least 1964, with only a single subtle name change over time. From 1940 to 1956, it was known at Schline’s Bar. From 1958 to 1964 the name was updated to Schline’s Stag Bar. In 1975, the place was known as Bullpen Tavern. The space served briefly as Club Richie Too from 1990 to 1995, before being reinvented as Dream’s Inn in 1995.

Horseshoes seem to have a special place in the hearts of residents of Southwest Baltimore. An annual tournament is held in the historic Pigtown neighborhood at the community horseshoe pit. The pit is located on a vacant lot at the corner of Ward and Bayard streets; it has existed for over 30 years. Regarded as an important stabilizing institution in the neighborhood, residents rallied in 2010 to prevent the site from being purchased by a developer. A local nonprofit, Baltimore Green Space, aided residents in purchasing and protecting the lot.

In a city where horseshoes are serious business, a formal pit at a bar in Brooklyn is nothing to scoff at. Dream’s Inn seems to be a unique and very “Brooklyn” institution. Stop by to have a beer and pitch a few shoes out back.