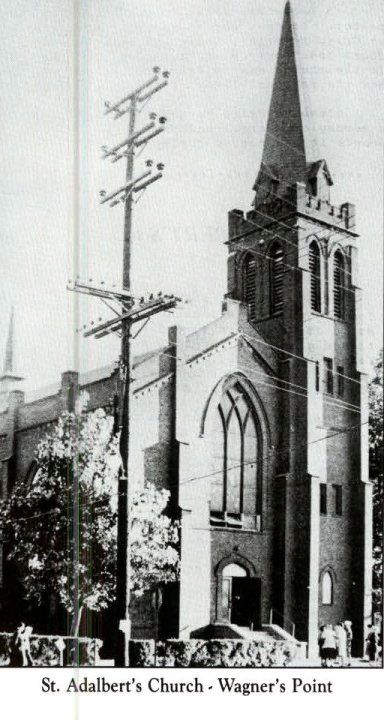 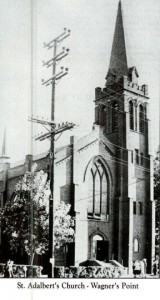 St. Adalbert’s Catholic Church was dedicated in November of 1907. Upon his death in 1903, Martin Wagner left his community of workers $10,000 to build a church. The Polish community of Wagner’s Point raised the remaining money for the church and parish hall, which became the centers of community life. The church was named for St. Adalbert, the tenth century Bishop of Prague who was revered in Poland. The church was built in the gothic revival style common in the Prussian section of Poland during the latter part of the nineteenth century and had church bells designed in the same style. St. Adalbert’s provided mass for local families in both Polish and English. Black Catholics from Fairfield attended, but were segregated in the back of the church during services. Father Charles Kotlarz remained at the Wagner’s Point parish from 1907 until his death in 1955. After the death of Father Kotlarz, Father Stephen F. Blazucki of St. Anthansius in Curtis Bay would offer a single mass at St. Adalbert’s on Sundays and Holy Days. Once the Polish community in Wagner’s Point began to greatly diminish, the church offered its last mass on September 3, 1967. Unfortunately, it was burned down in a case of arson the following year.