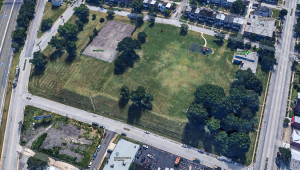 Robert W. Garrett donated the land for a park and playground for local children in 1919 when Brooklyn and Curtis Bay were annexed into Baltimore City. Garrett was a “public recreation devotee” who also won medals at the 1896 revival of the Olympic Games in Athens, Greece. He was a banker, philanthropist, and president of the Baltimore & Oho (B&O) Railroad.

Patapsco Avenue, Second Street, Maryland Avenue, and Third Street enclose the park, which was originally part of a larger tract that Garrett bought years earlier. On May 25, 1925 the park was opened. The playground included swings, slides, a sandbox, seesaws, and the most innovative developments in playground design for the time period. The park provides a space for healthy recreation but has also caused some controversy.

Later, in the late-1980s, there were complaints that adults had taken over the baseball field and were drinking, necking, and being loud and disruptive. The complaints pushed the City to cover up the baseball field and remove the backstop during the cover of night. However, there was an immediate outcry from the community once the field was removed. In 1987 residents pushed City Hall to bring back the baseball field. William J. Myers, a Baltimore councilman representing the area, was responsible for removing the baseball field. However, after further talks with residents living around the park, he found that more people were happy about having the field than they were upset about rowdy adult behavior. As quickly as Councilman Meyers was able to pull strings to take down the field, he was able to pull strings to bring back the ball field for the people of Brooklyn, but with more police protection to “keep the rowdies out.”

Banker, B&O magnate, and ardent supporter of outside recreation, Robert Garrett donated a plot of land that still remains a space of recreation and community building for children and adults of Brooklyn today.