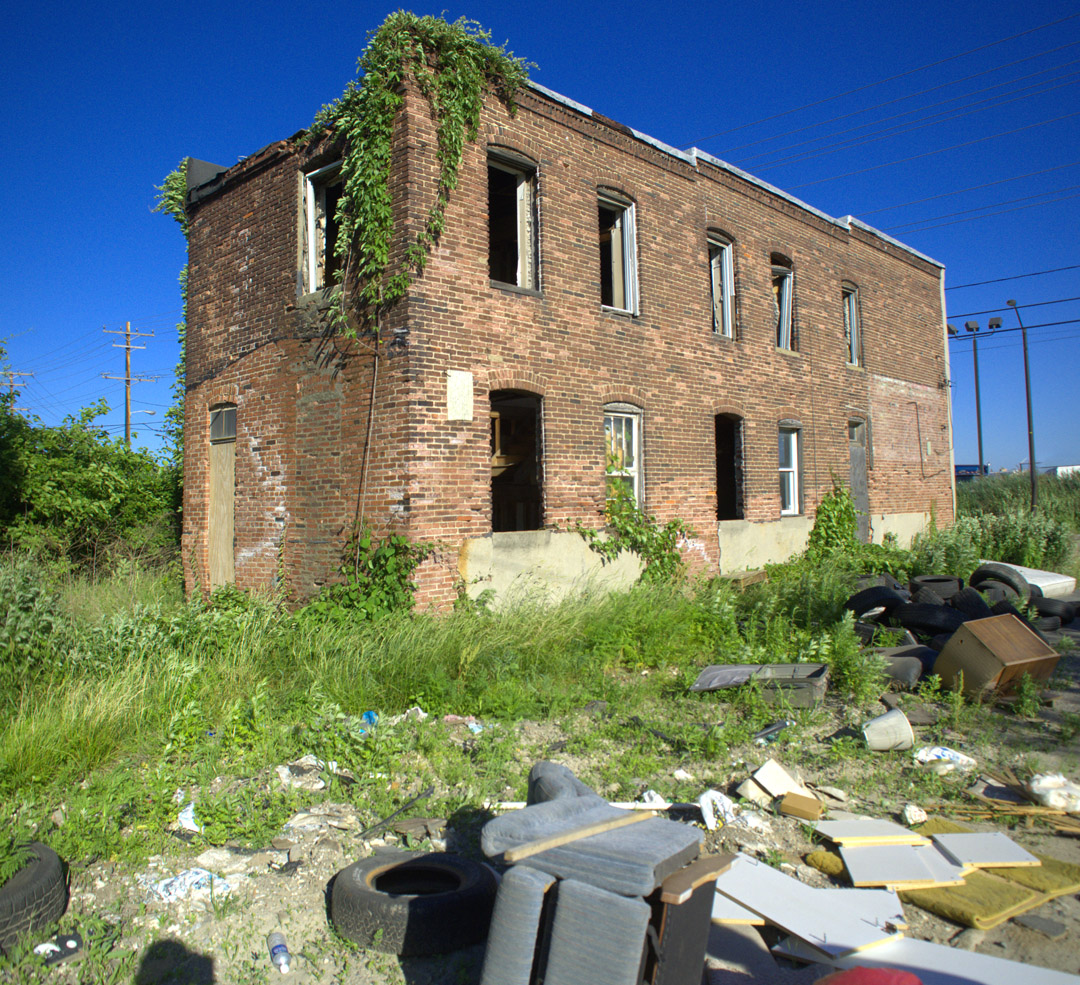 Throughout its history, Fairfield blended qualities of both urban and rural space. The residential neighborhood developed in the 1880s with houses built by mostly European immigrants who labored in the area’s rich soil and later worked in the burgeoning industries on the peninsula.

In the early twentieth century, African Americans from the South migrated to Fairfield. Fairfield functioned as a racially integrated neighborhood in the “almost southern” city of Baltimore into the 1960s.[i] Fairfield’s racial dynamics are similar to the neighborhood’s complex overlap of urban and rural qualities. Residents in Fairfield raised animals and had impressive gardens but were surrounded by the industrial plants that provided work as well as pollution and the potential for danger.

With the rise of the Fairfield-Bethlehem shipyards during World War II, the neighborhood experienced its most extensive boom in employment. These jobs would begin to dwindle in the late-1960s as a postindustrial era began and the neighborhood was plagued by disinvestment. In 1971, Fairfield was designated an Urban Renewal Area by the city and the Neighborhood Design Center, a non-profit group of designers offering assistance to disadvantaged areas, began to work with the residents of Fairfield to change the M-3 heavy industry zoning (to residential) but were unsuccessful in their endeavors. The NDC blamed the deterioration of Fairfield on “the contradictory and indecisive actions of the city during the period since the war.”[ii]

The 1990 US Census shows only 613 residents on the peninsula (split between Fairfield and neighboring Wagner’s Point), 273 (44 percent) living below the poverty line. By this time, most of the residents no longer worked in the shrinking number of industrial jobs available on the point. Chemical and oil storage companies, a sewage plant, and salvage yards dominated the landscape. With the rise of the suburbs and American car culture, workers did not need to live in close proximity to their places of employment—it was wise not to live by work when your employer dealt in hazardous chemicals.

There was hope in 1995 when, following an application submitted by Governor William Donald Schaefer and Mayor Kurt Schmoke, the Fairfield peninsula was designated one of three Baltimore neighborhoods that formed an Empowerment Zone (EZ), a President Clinton-era urban renewal program that invested millions of dollars in an attempt to revive floundering urban areas. An “ecological industrial park” was planned for the peninsula but never materialized. From the start, the EZ was not really concerned with the residents on the point, only the development potential of the land. The EZ did provide residents with one essential service—legal representation.[iii]

In 1996 residents of Fairfield and Wagner’s Point formed the Fairfield/Wagner’s Point Neighborhood Coalition and signed a retainer with the University of Maryland School of Law. In the words of Brenda Blom, University of Maryland law professor and member of the legal counsel for residents, the neighborhoods were “engulfed” by industry.[iv] Working with their lawyers, a majority of residents decided that relocation was their best option to achieve some sense of justice. Blom succinctly describes the success of the relocation effort as based in the residents “unwillingness to remain invisible,” which shows that a new way to see urban industrial space is essential to achieving justice.[v] However, Many Fairfield residents, like Jennie Fischer, the President of the Fairfield Improvement Association, did not want to leave.[vi]

By the end of 1998, the Neighborhood Coalition finally received a commitment from the city for relocation, and, in early 1999, the deal was struck for Wagner’s Point residents and then Condea Vista and FMC (chemical companies) put together a proposal to match a city offer for relocation in Fairfield. The hard-won relocation package provided residents of the industrial peninsula with the hope of living free of industrial pollution and the fear of a cataclysmic accident. However, the moment was bittersweet because residents had formed a tight sense of community out on the peninsula and it was the only life many people knew.

Some holdouts clung to their territory on the peninsula well into the 21st century. Baltimore City moved out the last two residents in March of 2011, and the last Fairfield home was demolished a month later.

[i] A 1911 article in the Evening Sun described the race relations of Fairfield: “The blacks call the whites by their first names and the whites, fraternally, greet the black in the same spirit. They eat together and live together. Fairfield makes its own laws, settles its own disputes, cleans up its own bloody sawdust and ignores civilization.” In 1993, Fairfield resident Jennie Fincher, who moved to Fairfield in 1914 from Virginia, told a journalist, “It was a mixed neighborhood. Whites and blacks lived together, everybody got along, and there was no trouble at all.” Patrick A. McGuire, “Miss Jennie’s Crusade,” Baltimore Sun, March 28, 1993. However, the racial picture is not without strife. An October 20, 1924 report in the Baltimore Sun describes a “street fight” in Fairfield where “25 men, whites and negroes, took part.”

[iv] Blom defines the “significance of being engulfed” on page 4 of “How Close to Justice?”: “All across America, there are communities that have been engulfed.  These communities may or may not have been built as company towns, but their primary characteristics include that they: (1) are surrounded by industrial development (primarily chemical, petrochemical or hazardous waste); (2) face serious issues of emergency access; and (3) suffered a restriction or decrease of city services. Industrially engulfed communities, both urban and rural, all across the country and around the globe are facing similar situations.”

[v] Blom’s unpublished dissertation is an astute insiders perspective on the relocation process that focused not only on the legal aspects of the case but also the social and personal lives of residents.

[vi] The NDC did a survey that showed ninety percent of Fairfield residents wanted to stay in their community.  Portorti, “Planning for the People,” 238; Fred Barbash, “Fairfield Takes Plea for City Services to Bias Unit,” Baltimore Sun, July 20, 1972.